So, here I am in the middle of a separation when I decide to go back through my LJ and look at all the nice posts I made about my wonderful wife during the summer months of 2006... only to find those months no longer exist.

Someone has broken into my account and deleted all the nice stuff I said about her.

How strange. Could it be some evil ploy? I am uncertain.

Thankfully, being a writer, I do not usually just write things in the LJ window. So I have back ups of everything. Not sure why someone would go to that bother... it's just... very.... weird.

PS: If anyone wants to throw my addy into the wayback machine and see if they can pull up the pages and save them out with pictures, etc., i would love that. Right now, my computers are completely hacked (again, a bizarre coincidence) and so I am unable to do certain things.

Also, files and pictures strangely disappear off my hard disk all the time.

I just want to go back to normal. If I ever was normal :)

So, it's been a long time since I posted.

Here's the scoop: I filed for divorce from Candice a week ago. Still waiting for the fallout. We'll see how it goes. In the end, we just weren't meant for each other. She's a great person, just not the greatest person for me--if that makes any sense.

Anyway, thought I would update my journal since it's been so long. Wish I had a picture of puppies or something to post, but I don't.

Hope everyone else out there is doing better than me :) Actually, I'm not doing so bad... to be honest it's been a bit of a relief.

Anyway, that's about it for now.

If anyone out there is in need of any technical computer work (programming, design, documentation, etc.), or knows of anyone who might be, please pass on my info. It would be GREATLY appreciated.

And here is my business card. Virtually :)

I can pretty much do anything. Seriously. I am very good at what I do, I have a lot of experience, I take full responsibility for my work, and I am fast.

Okay, so the astute of you will have noticed that I took my last post down.

But I did learn something.

Seven years ago, I had three incredibly dark years after my divorce. So dark, that at the end of the first, I said to myself, "Wow, this can't get any worse, at least."

Then it did again.

And I had nobody to turn to. No one. Not any family, not any friends.

Everyone had turned against me, and told me I was wrong.

I remember a point, sitting on my bedroom floor for about seven hours, with a big piece of paper and a pencil, listing out all the facts... because gee, if EVERYONE in the world except YOU thinks you're wrong, then, well, maybe you need to reassess....

I came out of those seven hours knowing I was right. You CAN be right when everyone else says you are wrong -- it actually is possible.

In the end, everyone did sway my way. Everyone saw that I was in the right and she was in the wrong, but it was a hard battle. But I WAS right. And the path to discovering that -- that I had the strength to see through everyone else's opinion -- gave me more strength that I ever imagined I was capable of, but it would have been far easier had I had friends to fall back on.

My LJ post a few days ago showed me something I never imagined: I have friends now. Some of you I don't even know!! Some of you I know very well. All of you are most excellent people who will always be invited into my home and who, if you ever need me, I will be there for.

So for that, I don't regret my post at all. For every other reason I do.

Thank you. You guys really did help me through what was a very, very hard few days.

This is my wordle, based on the prologue of my new novel:

I like that the word "Small" comes out so large, it really is one of the themes of the book.

I thought afterwards, without the actual prologue, this make little sense, so here it is:

The grass is tall, painted gold by the setting autumn sun. Soft wind blows through the tips as it slopes up a small hill. Near the top, the blades shorten, finally breaking to dirt upon which stands a willow. Its roots, twisted with Spanish moss, split and dig into the loam like fingers. The splintery muscles of one gnarled arm bulges high above the ground, hiding the small body, naked and pink, on the other side. Fetal positioned, her back touches the knotted trunk. Her eyes are closed. Above her, the small leaves shake together as their thin branches shiver in the cold breeze. The red and silver sky gently touch her face. Her breath is gone. The backs of her arms, the tops of her feet, are blue. She's too small for this hill, too small for this tree. She's too small to be left alone under all this sky.
# # #

Spending the morning watching Cloverfield. Then, like all DVDs I watch (because I watch them to learn story and everything else), I will watch it again with all the commentary tracks. 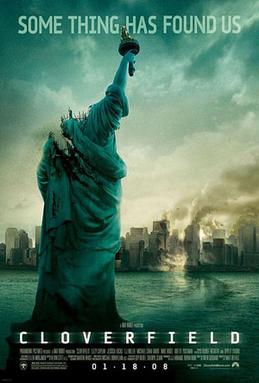 So far (50 minutes in) I'm liking it. Lots of cool stuff. I would love to write a short story like this. Funny how some things you just can't encapsulate in prose, though. I see that all the times in comics. My current comic research is bing done on the Whedon/Cassady X-Men 4 TPB. Very nice, and in places, almost impossible to recreate using plain prose.

I suppose you learn to work within your medium.

I found my rock:

A few years ago, back when the world was green and there were more kinds of animals than you've ever seen, I went through three extremly bad years. And through them all, I always kept this rock in my pocket that my daughter made for me while she was in the first grade. It is painted and varnished and even has her initials on it.

It grounded me, even at times when I was ungroundable, because rocks have that quality. That grounding thing.

Then one day, it went missing, but thankfully I was through all the bad stuff.

But I still really missed that rock.

Tonight is my daughter's seventh grade graduation party. And guess what? I just found the rock again!

I am so happy.

I got if from

mikigarrison. Check out her site for more of the story, but to me, it's just very happy :)

I've been to Buenos Aires. I'm sure it's quite easy to get people to dance with you in the street.

erdnase out (and happy).

I finally managed to find some time to sit down and create a new web site.

My last one literally sucked donkey balls. Seriously. I had to fish two or three out of its mouth before it choked on them.

You can find my new one at the same place: http://www.michaelhiebert.com

Let me know what you think, what you like, what you hate, etc.

I haven't really spent much time on it, but the last one I spent like seven minutes one, so the two hours I spent on this one vastly improved it.

Oh! PS: Does anyone know how/if I can syndicate my journal entries from that site onto here?

My mac mail account has been dropping emails sent to me. There is no spam filter. Mac uses BrightMail and doesn't give you an option to turn it on or off. If BrightMail decides it doesn't like the email being sent, you simply don't get it. The sender doesn't even get a bounce.

So I went looking for someone to complain to about this, and found this page: http://support.apple.com/kb/TS1184 which offers this UNBELIEVABLY sage advice:

If all else fails, the recipient .Mac member can contact .Mac Support. Fill out the support form here. Make sure you include the full header and body of the message that was not received.

Does anyone see a problem with this, or is it just me?